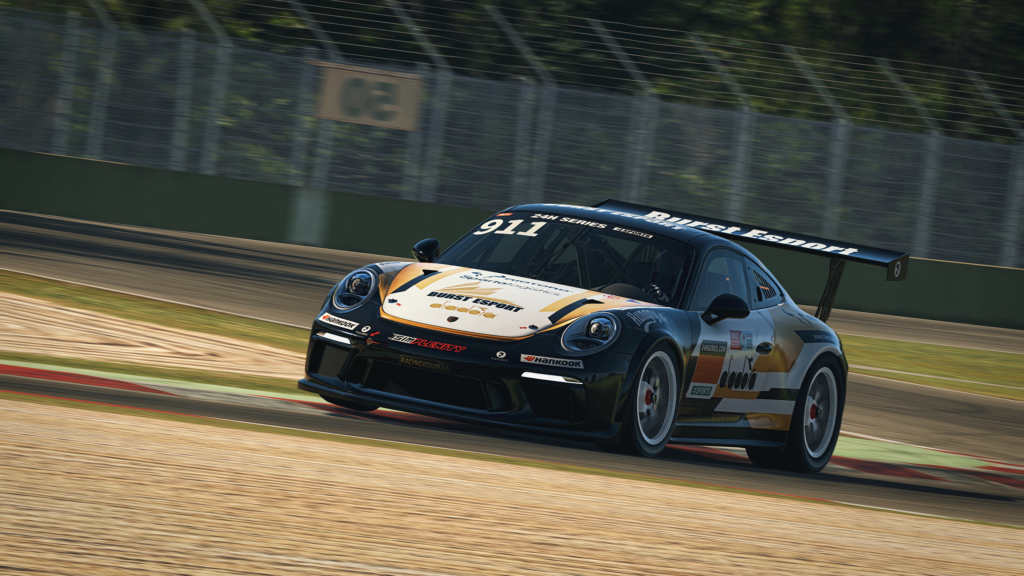 Anders Dahl and Evan Marion were back in our Porsche 911 GT3 Cup car for another season in the NEO Endurance 24h Series after finishing third in the championship last time.
This season there are sharing the car with Griffin Gardiner and Simeon Lynch.
Round one took place at Imola where for the first time, 4 classes would be racing in the series.

Qualifying and the start

Anders showed that our pace was great by qualifying in second place, just behind Williams Esports.
Sadly his start wasn’t as great as his qualifying. Anders got tapped on the exit of turn 2 which sent him onto the grass and lost a few positions and damage to the car. Anders got his head down and with his experience and amazing pace, it didn’t even take him 90 minutes to be back in a podium position.

Evan Marion took over from the dane after two hours of racing. A few laps went before Evan sadly missed his braking point and had contact with another car. That resulted in a 10 second post-race time penalty. However, the Frenchmen did a brilliant job with a car that had a significant amount of damage, both he and Anders were lapping a race leading pace.

In the end, it was very close if we would get the podium or not, but due to the time penalty earlier, we had to settle with P4 in the season opener. The guys did an incredible job and showed that we once again are in the fight for the championship!

To finish it off, Anders has provided this comment after the race:

“Decent qualifying put us P2. The start was terrible, as a competitor tapped us across the gravel trap and left us with bent steering and in the middle of the pack. Rule one of endurance racing is keeping clean, which gets very difficult when caught up in a pack. In the end, we managed P4, but the pace was there to win.”

Next round of the NEO Endurance 24h Series will be on the 29th of November at the Mahle 6 Hours of Sebring.